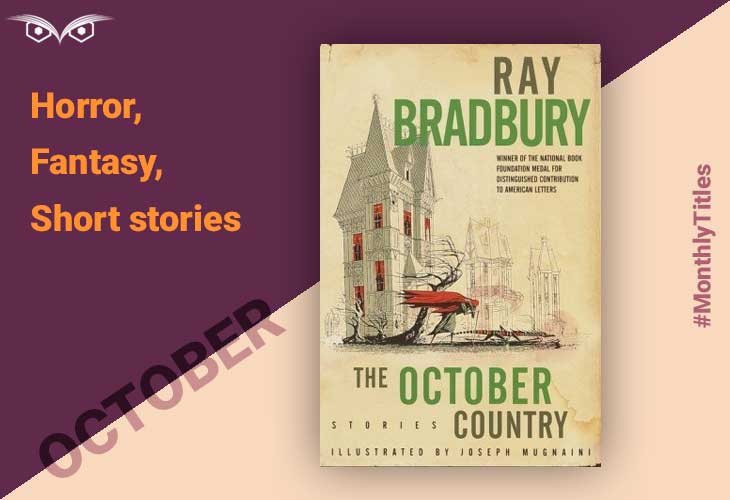 Okay, first, a little bit of the story behind choosing this book as the one for the October’s #MonthlyTitles book challenge.

Initially, I had chosen another title with the word ‘October’ for our challenge, and I even bought it back in March, as I was certain it was the one I wanted to include. I read many positive reviews, so I relaxed, forgot about it and thought I had the last few months of the challenge all planned (not quite, as it turned out.) I picked it up again in September, as I had finished with my September read, so I wanted to get ahead and finish the next one in advance. The reading didn’t even last two days, as I just couldn’t make myself open the book and read. I had to force myself to actually go through another page of it, and this is something that doesn’t happen often, I usually finish everything I’ve started. But not that one. Thank goodness I had time to choose a different book, but the choice was not that great—I struggled with finding another read and it made me nervous, as well as frustrated at myself for not researching enough, apparently, in the first place.

Then one day my sister came up with a bunch of titles and suggested I look them up. That’s how I found out about The October Country by Ray Bradbury and I remember I was so happy and relieved! My book challenge was saved and I was also saved from the misery of reading that boring book I had originally chosen. On top of it all, it happened to be the perfect month for The October Country, as the last day of October (the day I have to post my review) is actually Halloween! Are you curious to know which one is the book I’d originally planned to include? I’ll spare you the title, trust me, you don’t want to bore yourself with it. I’ll just mention that it treats similar problems as the ones the world faced in 2020 and this is all I am going to say about it. Now back to the good reads.

The October Country is a collection of Gothic horror short stories by the great American writer Ray Bradbury, written in 1955, almost 70 years ago. It gathers fifteen of the twenty seven stories from his 1947 collection Dark Carnival. He made changes to some of the original tales, cut out twelve and added four more to the new collection. If you ever wondered what will happen if you mix horror with fantasy, The October Country is what you will get. This short opening paragraph is now one of my favourite pieces of writing ever, and the best description of Octobers:

October Country
… that country where it is always turning late in the year. That country where the hills are fog and the rivers are mist; where noons go quickly, dusks and twilights linger, and mid-nights stay. That country composed in the main of cellars, sub-cellars, coal-bins, closets, attics, and pantries faced away from the sun. That country whose people are autumn people, thinking only autumn thoughts. Whose people passing at night on the empty walks sound like rain… .

Bradbury’s writing is so poetic, so simple yet so effective. Deeply imaginative, macabre and incredibly bizarre, playing with your senses and beliefs, these tales are the perfect accompaniment for crisp October, November and December evenings. Some of them are actually fun to read, not fun in the laughing-out-loud meaning but more like in a light-hearted and humorous way. Others are really creepy and there’s also the disturbing psychological element in them that adds to the unsettling feeling. His writing is so compelling and evocative, it immediately shows his talent and skills as a writer. He is able to transport you in the dark realms of the occult, macabre and twisted, without an effort, making it seem ordinary and you end up wondering ‘How come no one has written anything like this before?’ The concepts are so inventive and unique, I just loved every single tale (well, maybe there’s one or two that I didn’t quite understand completely but that’s okay.)

What impressed me the most was the fact that he used simple, ordinary ideas for his plots and, transforming them through his rich imagination and vocabulary, turned them into something really special. The style of writing resonates and leaves deep memories in the reader’s mind. The way Bradbury uses few words, but carefully chosen and packed with meaning, adds to the mysteriousness and makes the whole experience even more atmospheric.

An absolute must-read for crisp dark autumn and winter mornings or evenings. It’s perfect for (but not limited to) the colder months of the year and, of course, Halloween. 🍂🎃

It’s quite hard to summarise the plot of a short story, as I fear I will give away most of it, but I’ll try to give you a one-word or one-sentence description of each of my favourite tales, so you can get an idea what they revolve around. So, in the order they appear on the contents page:

“Skeleton”: a person’s skeleton having a mind of its own

“The Emissary”: spooky ghost story about a boy and a dog

“The Crowd”: someone noticing mysterious patterns about crowds forming around accidents

“The Scythe”: a tale about a man coming into possession of a scythe and realising there’s more to reaping the wheat field than he thought; a reference to the Death Reaper

“The Wind”: supernatural and creepy ghost story about a travel writer haunted by unusual ghosts of his past

“Homecoming”: The Munsters vibes; a human boy feeling like an outcast in a family of vampires.

You can also enjoy the creepy illustrations included in some of the short stories I mentioned:

Lastly, here’s another quote from “The Jar”:

It was just one of those things they keep in a jar in the tent of a sideshow on the outskirts of a little, drowsy town. One of those pale things drifting in alcohol plasma, forever dreaming and circling, with its peeled dead eyes staring out at you and never seeing you… .

Bradbury is an amazing storyteller and I enjoyed this collection immensely. Definitely recommended for fantasy and horror fans alike. And another 5-star review added to the #MonthlyTitles book challenge! There’s two more months until we complete a full year of #MonthlyTitles, so stay tuned!