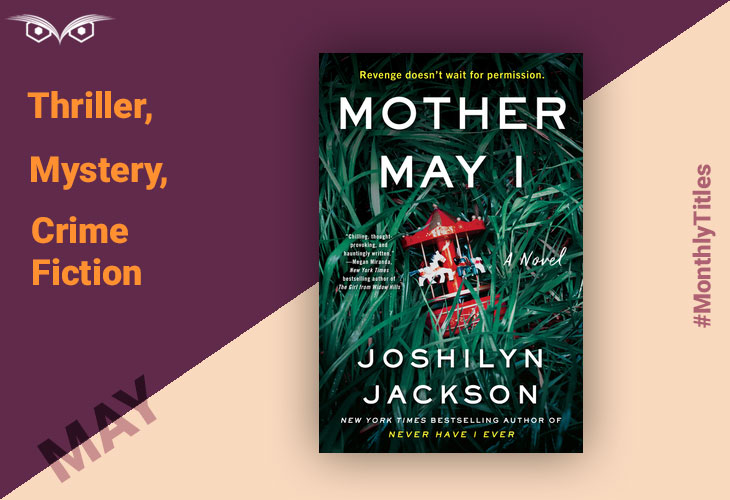 Mother May I: book review

My choice for the #MonthlyTitles book challenge for May was… Mother May I by Joshilyn Jackson!

Wow, this book was so intense! It gives me the chills just thinking about it. It is definitely a page turner, it will keep you on the edge of your seat the whole time and won’t leave you relaxed. And it also has one of the greatest and spine-chilling first sentences I’ve ever encountered in a book! Here’s what happens…

‘Growing up poor in rural Georgia, Bree Cabbat was warned that the world was a dark and scary place. Bree rejected that fearful outlook, and life has proved her right. Having married into a family with wealth, power, and connections, Bree now has all a woman could ever dream of.

Until the day she awakens and sees someone peering into her bedroom window-an old gray-haired woman dressed all in black who vanishes as quickly as she appears. It must be a play of the early morning light or the remnant of a waking dream, Bree tells herself, shaking off the bad feeling that overcomes her.

Later that day though, she spies the old woman again, in the parking lot of her daughters’ private school… just minutes before Bree’s infant son, asleep in his car seat only a few feet away, vanishes. It happened so quickly-Bree looked away only for a second. There is a note left in his place, warning her that she is being is being watched; if she wants her baby back, she must not call the police or deviate in any way from the instructions that will follow.

To get her baby back, Bree must complete one small–but critical–task. It seems harmless enough, but her action comes with a devastating price.’*

I thought the idea for the plot was original, although at first it seemed a bit naive and the whole scenario—(too) staged. The little voice in my head is saying right now ‘Well duh it’s a fiction book’. But as soon as more details started to come out on the surface and the background stories began to unfold, I realised it wasn’t. The whole story was planned and well thought through. What struck me the most was the authenticity of Bree’s voice as a mother. Her strength is phenomenal as well as her determination and fear, and all these feelings were skillfully depicted in her character. Having made her have such a diverse background definitely helped her to build a personality fit for every occasion, but even so, she wasn’t prepared for this ‘role’, the most important of her life.

I don’t want to say that there’s not much happening and there’s not a lot of action in the book, because there is. But at the same time, it’s a very narrow set of characters and not many scenes in which they go out and about. You just have to wait for all the action. All this ‘waiting’ is filled with tension, mysteries, fear, questions and many doubts. During the whole time you feel like an investigator: first you go through all the processing of the situation and the information along with the characters, you do your research and become a part of the plan, and then it’s action time! For the most part of the story, we’re witnessing Bree’s internal monologue and doubts, her past, her insecurities but also strengths. We get to know what she’s good at and what she’s scared to lose.

As the perspective shifts from her character to another, we also get to see Marshall’s side of the events, which gives us a fresh point of view and we learn more about him and his personal small battles he’s trying to wrestle with in his mind. Marshall is Bree’s long-time friend from the past and he was married to Betsy, Bree’s best friend who passed away. He’s a key and very lovable character. So even though we don’t move around much, at least for the first two quarters of the book, there’s a lot going on on a psychological level. It sets the foundation of the actions that follow and it’s important for the reader to get to know the characters and what leads them to the decisions they make. Then just at the right time we get some answers to start to bind all the pieces together. We don’t have the whole picture yet but it’s enough to keep our interest and be curious about the ending.

Speaking of, I kind of expected it to end this way, I mean the very very end, I just didn’t see the part before that, the sad part, coming. It was definitely a plot twist and I love those! Overall, exquisite writing, a complex and very intriguing plot, strong and believable characters, great story, big mysteries, lots of secrets and revenge, and a surprising turn of the events at the end. It’s fast paced, once you get through to the second half, and hard to put down or to stop thinking about. That’s how you know it’s a good book!

* Blurb taken from Goodreads, with some changes made.