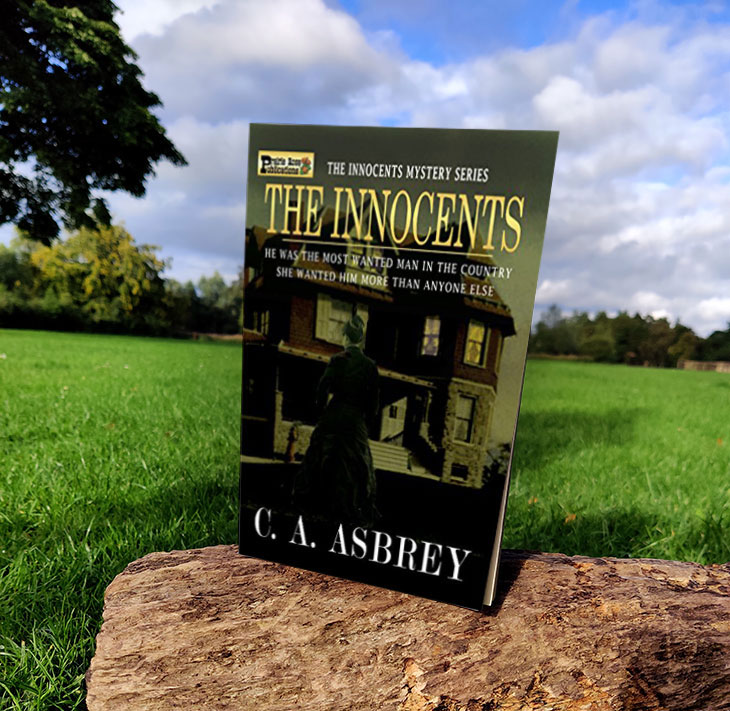 A couple of years ago I received a copy of this book by the author via Booktasters in exchange for an honest review. Thank you, Booktasters and C.A. Asbrey, for the amazing read!

The Innocents is the first book of The Innocents Mystery Series out of six books in total; the last part was released in July 2020. It is a great piece of historical fiction and even the mere sentence on the cover was enough to draw my attention:

He was the most wanted man in the country. She wanted him more than anyone else.

I truly enjoyed The Innocents. It is a very fast-paced and cleverly-written novel with so many mysteries, surprising revelations and challenging situations. It is set in the Wild West, more specifically in Wyoming in 1868, and the skilfully described historical setting is a great addition to the atmosphere. We meet Abigail MacKay, or Abi, a young woman with a painful past who has the arduous task to chase criminals and murderers, facing at the same time people’s prejudices for being a female detective. She’s a Pinkerton agent, a master of disguise and the science of investigation, and works undercover which allows her to get closer to the outlaws. Abi is on the trail of The Innocents (a western gang that robs banks and holds up trains carrying payrolls but never harms innocent people), until that one time when she is caught by another band, pretending to be the real Innocents, and they leave her to die in a barn. That’s how she meets the two handsome criminals, the ringleaders of The Innocents, Nat Quinn and his uncle Jake Conroy, who will change her life and her views on criminals’ scruples and humanity. They make a truce – Nat and Jake saved her life and in exchange she won’t hand them in. Not until they solve a double murder. Nat, Jake and Abi team up and start working together in a swirl of dangerous situations despite their differences: Abi needs to learn a lot about teamwork and Nat and Jake have to trust her more. The events that follow – a lot of questioning, disguises, following clues in brothels and hotels – lead them to the inevitable end – the end of the truce and their return to the opposite sides of the law and becoming enemies again. Best enemies. But will they stay like this forever?

The book certainly kept my interest the whole time and made me want to learn more about the characters and see how the story unfolds. We’re given details about their past piece by piece which makes them more interesting and enigmatic but at the same time we know them well enough to start sympathising and growing on them. Just like Abi, I didn’t want the journey to come to an end because I became fond of the three protagonists and I felt as if I were a member of the gang. The characters are so believable, the dialogues so clever, witty and dynamic and the wry humour is a fresh addition to the dark events that happen throughout the novel. The chapters had the perfect length and were also divided into additional parts, providing the readers with just the right amount of ‘resting places’, so that we could stop for a second and put together the pieces of the puzzle by ourselves. I liked how the different plots intertwined and I felt like watching a film, that’s how fast paced and smooth the writing was.

I really liked Abi’s role and her feminist attitude which is a question of present interest. The way she handles the displays of underestimation and disregard for being a female detective is really impressive and praiseworthy and makes her a strong character. Even Nat, with his sharp wits, and Jake, the ruthless gunman, are astounded by her recklessness at times and determination to prove herself in this man’s world. Nat has been drawn to Abi by her stubbornness and for being a challenge for him. There was a great chemistry between the three of them and the romantic spark between Abi and Nat is so strong in the rare moments of intimacy that it will leave you with a desire to read more about these two.

The one thing I found a tiny bit confusing and hard to follow (it is not a big deal compared to the overall delightful read and the countless positive sides of the novel) is that the whole process of solving of the crime and putting together all the pieces was concentrated in the final part of the novel. Following the unravelment could be a bit too complicated if you hadn’t paid much attention to the details or if you have missed some of the clues throughout the story. Another thing was the lack of a more profound description of the perpetrators earlier in the course of the story and what their motives were, since the book was focused mainly onto the three main characters, Abi, Nat and Jake. Maybe that is why it took me a while to understand the final part and to tie everything together. I would pay more attention during a second read. Nevertheless, as I had no idea ‘whodunit’ until the very end, I was glad to find out everything and see all the connections between the characters.

I couldn’t put this book down and highly recommend it to anyone who likes intricate murder cases, solving mysteries, opinionated female detectives and handsome and witty ‘innocent’ criminals, all of this flavoured with a pinch of romance and the author’s terrific sense of humour.

I was really looking forward to the second book in the series, so that I could feel a member of the gang again! That said, even though I read this book a long time ago, I’d definitely like to read the rest of the series and more from the author as a whole because her writing was superb.

See you in my next review.