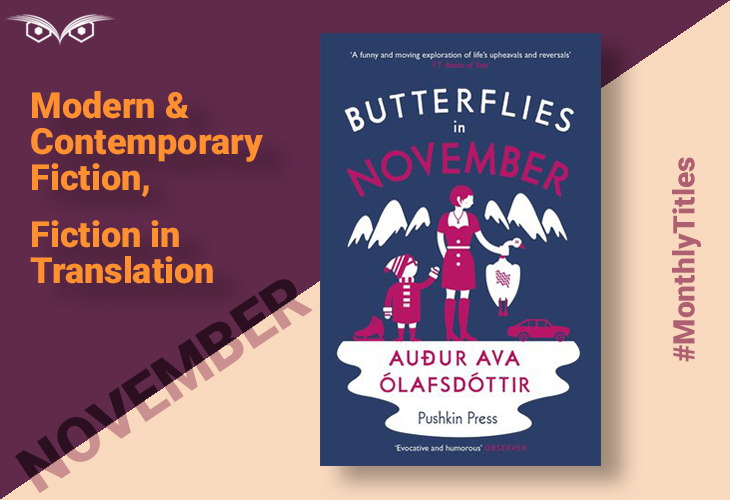 My choice for the #MonthlyTitles book challenge for November is Butterflies in November! Many people say this book is quirky and odd. I think so, too, now. It definitely was one of the strangest little stories I’ve ever read. At the same time, it is one of the sweetest, most heart-warming books you’ll find. The story is so beautiful and will become very close to your heart, as well as the characters, as they navigate through this thing called life, landing briefly before fluttering off again. Here’s the blurb.

‘After a day of being dumped – twice – and accidentally killing a goose, the narrator begins to dream of tropical holidays far away from the chaos of her current life. Instead, she finds her plans wrecked by her best friend’s deaf-mute son, thrust into her reluctant care. But when a shared lottery ticket nets the two of them over 40 million kroner, she and the boy head off on a road trip across Iceland, taking in cucumber-farming hotels, dead sheep, and any number of her exes desperate for another chance. Blackly comic and uniquely moving, Butterflies in November is an extraordinary, hilarious tale of motherhood, relationships and the legacy of life’s mistakes.’

Exactly what the blurb says. The story is so ordinary but at the same time unique, it will hardly ever repeat itself. How many times would someone find themselves on a road trip with over 40 million kroner and someone else’s child? But the way it is narrated is really down-to-earth and the author makes it all seem natural. Some of the themes the book explores are marriage, divorce, motherhood and relationships as a whole. The characters question whether one should follow the path that is known and established or find their own way to live by making decisions and living with the consequences, self-discovery and wondering what the right choice is.

Much of the quirkiness of the book comes from its main character, the narrator (who remains unnamed), as well as Tumi, as he will later turn out to be a key addition to the narrator’s life. None of the characters, main or secondary, knows how to ‘excel at life’. They’re all trying their best and learning from each other. The narrator is a woman in her thirties who hasn’t got it all figured out yet, at least not according to her ex-husband. He’s quite the colourful character himself, I had so many laughs while reading their dialogues, they’re hilarious. The way he treats her is just so unbelievably ridiculous and will leave you with your mouth open, and confused, as the narrator herself often feels after their encounters.

Tumi is the sweetest child ever, he is shy and silent most of the time, mending on his own, trying to understand people (and to be understood) because he is deaf and has a speech impediment, but he is the most compassionate and considerate little boy. So empathetic and protective of his adult companion, I really grew fond of him. Like butterflies, the narrator and Tumi encounter so many people on their trip across Iceland but they both struggle to make a true and lasting connection. They go from one place to another in search of something, briefly passing by everyone on their way and go on on their journey. I thought they were very much alike, even though the narrator is over 30 years old and Tumi is only four.

I cannot miss the butterflies reference, as it was very sweet and so subtle, I think everyone can interpret it in their own way. The way I viewed it was as a metaphor for changes, big or small, the way a butterfly’s wing on one side of the world can cause reverberating consequences on the other. The way small things can add up over time and cause a huge change in a matter of seconds. The way butterflies flutter briefly around, never ceasing, never settling or putting down roots, was another thing that relates to the narrator and Tumi, so I think the title of this book was very cleverly chosen.

In terms of plot, sometimes it will be difficult to follow the thread and understand what exactly is happening. It is a bit messy as the characters’ personalities. I couldn’t keep track of all the secondary characters at all times and the narrator jumps from story to story or thinks about a million things at once. The most confusing thing, though, were all the bits in italics dispersed throughout the chapters, bits of another story which, until the end I was not entirely sure whether they are related to the main plot or not. I tried to think of the events chronologically and organise them in my mind but they still didn’t quite fit. Were they flashbacks from her childhood? Dreams she had? Desires? My closest guess is that these were glimpses of the narrator’s past, of her childhood. Actually, if you have an idea, please let me know in the comments below or on social media! Even after finishing the book I’m still not sure. The good part is that there are not too many of them and you can easily forget about them altogether.

If you’re looking for an easy and quirky little book to fill your days up to Christmas with, give Butterflies in November a try! It is an honest and hilarious narration of all the things in life we don’t notice but are always present.

P.S. The epilogue with its 47 cooking recipes and one knitting recipe was definitely a fun addition to the story, and even if the bigger part of the dishes were not actually achievable, they were yet another, a final representation of the characters’ inner worlds: messy, following some of the rules but winging it for the bigger part of the way. I might even try to recreate some of them, the Christmas cake for sure! I’ll pass on the knitting ‘recipe’, though…