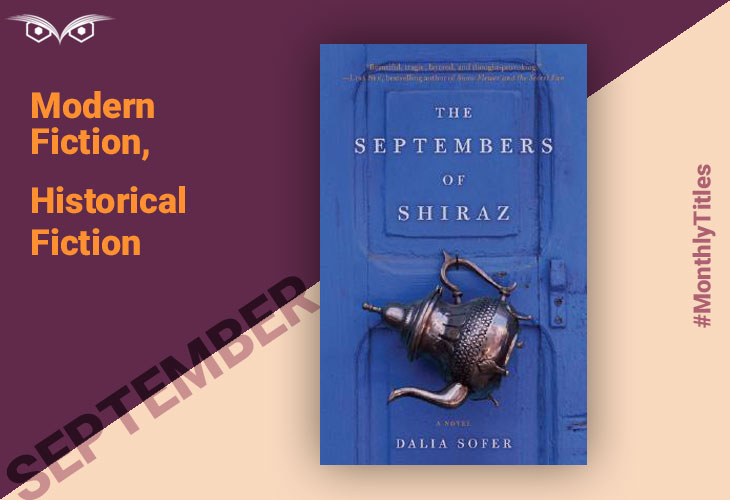 The Septembers of Shiraz: book review

I absolutely loved The Septembers of Shiraz and I knew it would be a special one, I was really drawn to it from the first time I looked at it. When doing my research for September and the #MonthlyTitles challenge, I also found a couple more books with September in their titles and hesitated which one to choose. But not for long, as I somehow knew this would be the one, I don’t know why, and I turned out to be right. It became one of my favourite books ever and certainly one of the best that form part of this #MonthlyTitles challenge list. It was a bit difficult to find, it wasn’t in any bookshops, I tried to find it online, but I think it wasn’t available at the time, so I visited some local second-hand bookshops to look for it. When I couldn’t find it there either, a friend of mine suggested I look into a second-hand website for books, and that’s how it became mine. I was even able to purchase the edition with this particular cover, the one with the silver teapot, which is the one I preferred. I’ll talk more about it later. The images below shows you both covers, as well as the film poster on the third one (there’s an adaptation for the big screen featuring Adrien Brody and Salma Hayek, which I haven’t watched yet, but really want to.)

So I finally had the book! I felt anxious about starting it, as I thought it would be a very complicated and distant topic, one that I would struggle to understand or that I would need more background knowledge to be able to fully comprehend. Some books do that – they intimidate me, especially if they’re popular and I have even the slightest idea of the plot. But this wasn’t the case at all. The Septembers of Shiraz was written in a very accessible and engaging way, and it is the type of book that stays with you long after you’ve read it. It’s an important story, one that needs to be told, and the fact that you learn so much from it, even though it’s historical fiction (but based closely on the author’s family history), says a lot. Here’s the blurb, taken from the dust jacket of the book:

‘In the aftermath of the Iranian revolution, rare-gem dealer Isaac Amin is arrested, wrongly accused of being a spy. In the wake of his terrifying disappearance, his family must reconcile a new world of cruelty and chaos with the collapse of everything they had known.

As Isaac navigates the tedium and terrors of prison, forging tenuous trusts, his wife feverishly searches for him, suspecting, all the while, that their once-trusted housekeeper has turned on them and is now acting as an informer. And as his daughter, in a childlike attempt to stop the wave of baseless arrests, engages in illicit activities, his son, sent to New York before the rise of the Ayatollahs, struggles to find happiness even as he realises that his family may soon be forced to embark on a journey of incalculable danger.’

Unfortunately, what happens in this book is what we also see today, or the consequences of it. A slow starter, but engrossing nevertheless, you just need time to get accustomed to the characters and their realities. Once you do that, they become family and you want the best for them, you wish things could turn in their favour, you wish things could be different. Because it’s not just a book about history, it’s also about the people. It’s how their daily lives are affected by governmental decisions and politics, by the law. It gives insight into a far-away part of the world and events that most of us wouldn’t have thought about. It runs along the edge of what’s ethical and what’s not, and most importantly, tries to answer the question whether the end justifies the means. Rather than giving you all the answers, it makes you think. Along with the main characters, the reader goes through a spiritual journey and re-thinks all the beliefs they once had.

At times The Septembers of Shiraz was sad, at times it was horrifying, but always thought-provoking, emotional and beautifully written. It explores the themes of materialism and whether it is always a bad thing. The book puts one small family in the spotlight, as well as some of their closest friends, and by so doing, sheds light onto the consequences of a regime that are not widely-known in the rest of the world. It keeps you on the edge until the very last moment, the very last page, as you worry if something would happen or not to your favourite characters.

The book doesn’t focus on a single thing or a problem, it rather depicts a wide picture of Iran, and Tehran, in particular, and how the people were living there, how they’ve dealt with the political implications of their choices. We get everyone’s point of view and they become interwoven as the story progresses.

What I really liked about it, and I guess about all books which do it, is that nothing is ever only black or only white. Nothing ever has only one side, and all the decisions we make are influenced by both the good and the bad. This book explores the grey area, the place where limits are blurry and this is what life is. Nobody is inherently good or bad or has only good or bad thoughts. We all make good and bad choices and this is what makes us human.

Despite all the suffering, torture and harrowing scenes in the book, Sofer writes beautifully and delicately describes every character’s story and personal struggles, alternating between their realities and building a common picture at the same time by binding them all together. This binding is, I think, what Parviz, his son, often thinks about while wandering the streets in New York. He thinks about his own battles and insecurities and how different they are from other people’s hardship. But this difference doesn’t make them less important or valid. Everyone goes through something and suffers in their own way. The whole family experiences the most difficult year of their lives in a different way. Everyone has a point of view and a story to tell, even the prison guards and investigators. They all have come to realise what their lives have been like and debate whether they want or should keep living them the same way as before.

Finally, let’s discuss the beautiful cover. I loved how evocative it is, providing us with such a subtle hint of what the story is about and you can only fully understand it when you’ve finished the book. There’s something nostalgic and distant, almost gone, but it is still present and strong, still binding them all together.

The book has won numerous awards and has been longlisted in prestigious literary competitions, amongst which the Women’s Prize for Fiction, the Orange Prize and IMPAC Dublin Literary Award. It’s also been translated and published in 16 countries.

To finish this off, I’ll share the last part of the blurb, which summarises the melancholic feeling after finishing the book the best:

‘A page-turning literary debut, The Septembers of Shiraz simmers with questions of identity, alienation, and love, not simply for a spouse or a child, but for all the intangible sights and smells of the place we call home.’