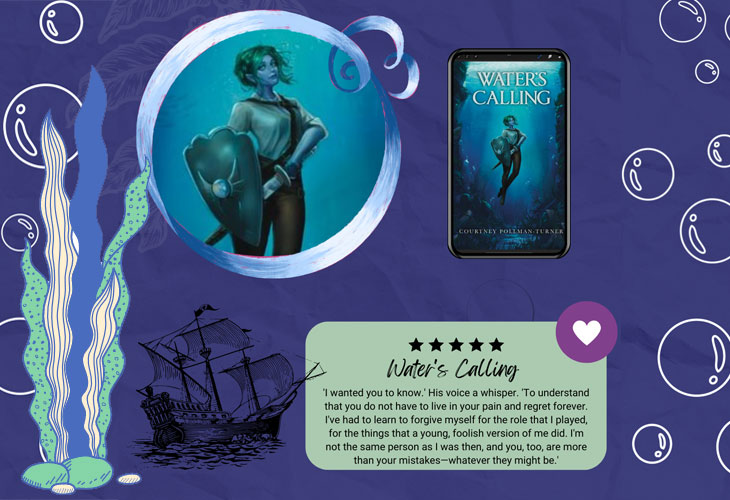 An eBook copy was kindly provided to me by SmashBear Publishing.

This is going to be a long one, but I just want to say so much about Water’s Calling! When the lovely team at SmashBear Publishing contacted me and asked if I was interested in reading and reviewing this book, I said ‘yes’ without hesitation, because based on my previous reading experience with their books, I assumed this one would be good too. Well, ‘good’ is not a good enough word to describe what I just read.

It is fantastic! What an adventure! I realised, after I finished it, that this was exactly what I needed to read, at this moment in my life especially. Sometimes, the timing of books coming your way is perfect and this was the case here. I am so excited to write this review and I need you all to read the book, so you can experience everything I did, and to add a great read to your collection.

‘Ron’s voice was gentle when he replied, as if he thought that the wrong words could break her. She was already broken.

LeiRain has always longed for adventure, to escape the hate-filled glances of the villagers. But when a militia of human supremacists called the Royals attack her home, life as she knows it is shattered. Now Rain must grieve her previous life whilst surviving with the Royal threat looming over her.

Silver is on a mission. He must find a way to take down the Royals before they tear the fragile peace between the races apart. But when he finds LeiRain, a blue-skinned blend of human and water god, the mission becomes personal. Silver must fix what the Royals are trying to break or Rain will never be safe.’

I didn’t read the synopsis before starting the book, so I had no idea what to expect. Once I started reading, I couldn’t stop, I was immediately immersed into the story. It is very captivating, not just by the way of writing, but also because of the characters. They are down to earth, which may sound a bit strange, given the fact that it is a fantasy book and almost all of the characters possess some extraordinary powers. What I mean is that despite their otherworldliness, they all have their own struggles and worries, their own battles to fight, which are exactly like those of everyone else. Magical powers don’t make you immune to hardship, loss and pain. These are the things that make the reader relate to all these magical beings and that similarity was executed perfectly in this book.

This brings me to my next point, which is related to the mixture of reality and fantasy. I love books that don’t only invent things and beings but rather add them to the real world, make them part of it, of our own reality. Yes, there is magic and things that don’t actually exist, but they were skilfully incorporated into the everyday lives of the characters. More often than not this is hard to achieve and feels unnatural, forced. The author managed to blend those two together really well and one could really believe that this world actually existed. A little bit of magic power in the real world would be great, but like with everything that has some sort of power, it could also do harm, if used for the wrong purposes.

An owl hooted in the distance and a light breeze rustled the leaves. Somewhere nearby, there was the soft buzz of nighttime insects. Warm and free for the first time in days, sleep quickly overtook her.

World building is very strong in Water’s Calling and I admire the author’s ability to create such complicated worlds, creatures, relationships and politics. There were so many details in the way she described everything and they only made it seem like it actually existed. As with every magical story, there were battles, laughter, friendships and enemies, villains, victims and heroes. I loved the political side of the story which gave it depth and made it even more relatable. There is always a hidden motive and every villain has a mission, a drive to destroy and wreak havoc. It gives the good guys a reason to fight, and when there’s revenge involved as well, the mission becomes even more dangerous and personal. I grew fond of the characters and it was a delight to share this journey with them. At times I wondered if they truly meant what they claimed their intentions to be, as in order to defeat a common enemy you need to know who your allies are, you need to trust them. I had my doubts and it was interesting to see how the relationships evolved until the end of the book and see if I was right or wrong about a character.

Every time I read about Ronland the Red, the dwarf that accompanies Rain and helps her when she needs it the most, I couldn’t help but be reminded of Hagrid, the kind-hearted half-giant from the Harry Potter books. The conversations between Ron and Silver were always fun to read and I loved how their relationship grew with time. Friendship is an always present theme in the book, and the message that being able to rely on your friends when you need them the most is precious. There’s also the theme of grief, beautifully explored, and it felt as another character, a presence that is and always will be accompanying those who have lost a loved one. Love and romance, as well as lust, form another part of the story, the importance of finding that special and real connection between two souls, the care and the feeling of home when you’ve met the one person in the whole world who is your person. Courage is something in those kinds of fantasy stories that is easily taken for granted. We know that the protagonist, the hero, is courageous, we don’t have second thoughts about it. But this is not often the case in reality, when you think about it. No one has been born fearless, courageous or able to do well under pressure from the get-go. This is the kind of growth we see in LeiRain, she grows into a brave young woman, and witnessing this transformation was very special. A strong, female lead made the story even more inspiring and relatable.

LeiRain watched her reflection in the well-polished steel as she passed the weapon back to Ron and pressed her hands to her chest where grief was a physical pain.

I only had two issues that I struggled with a tiny bit while reading. The inner worlds of the characters were depicted really well, and even though the focus was on LeiRain’s more than the others’, there was an overall strong exploration of their inner thoughts which resulted in better understanding of their actions. Here comes the first thing I thought was prevailing in the book: the author focuses on the present moment and what the characters are thinking here and now, and was lacking, in a way, in providing us with a background story of their lives. We learn a lot about LeiRain, her past and personality as a whole, but we don’t see too many details revealed about the rest of them, and they are a very interesting group of characters. For example, Ron’s history and that of his family are well explained and interwoven into the plot, but I was disappointed that Silver’s story didn’t get as much space and attention in the book as I would have liked to, the verdaants seemed really cool and mysterious. I wanted to know more about the rest of the characters as well and I think there will be a second book, so hopefully I’ll get to know my favourite ones better!

His magic felt sticky and sweet, like honey on her fingertips. Like a golden summer sky after she emerged from the ocean. If felt new but also nostalgic.

The second thing I struggled a little bit with was the pacing in the first part of the book, but in the end, after the last chapter, I didn’t see it as a problem, at least not to the same degree as I did while reading. I found it hard to go on in the beginning, because there was not much happening and although I already had an idea of what the characters wanted, I was only reading about their daily routines. It became a bit repetitive and too long, too much of the same information that was leading us nowhere. After finishing the book though, my thinking changed. I saw that these long bits of the story, when nothing seemingly important happened, were needed, maybe intentionally sought by the author, to contrast with the latter part of the book and make it even more action packed as it was. There was so much going on, so much battles and movement, that I realised that the characters, as well as the reader, actually needed the tranquillity in those first chapters. They needed as much rest as they could get before heading on to the unknown and embark on an extremely dangerous journey without knowing if they’ll get out of it alive. In that slow-paced first part of the book there were also some breath-taking moments that I wish didn’t happen to the main character, so I definitely got to appreciate the piece in the beginning.

The author writes beautifully, unfolding the story in an engaging and emotional way that feels close to the reader. Reading Water’s Calling, and following the pattern of the events in the book, is like breathing normally in the beginning, then you get excited and your breathing gets faster, then something happens and suddenly you’re struggling to breathe. You hold your breath to overcome whatever stands in you way, only to learn how to breathe normally again in the end.

Emotional, adventurous, clever, action-packed story, a fantasy world that will give you a place to escape to and dive underwater to unknown secrets.