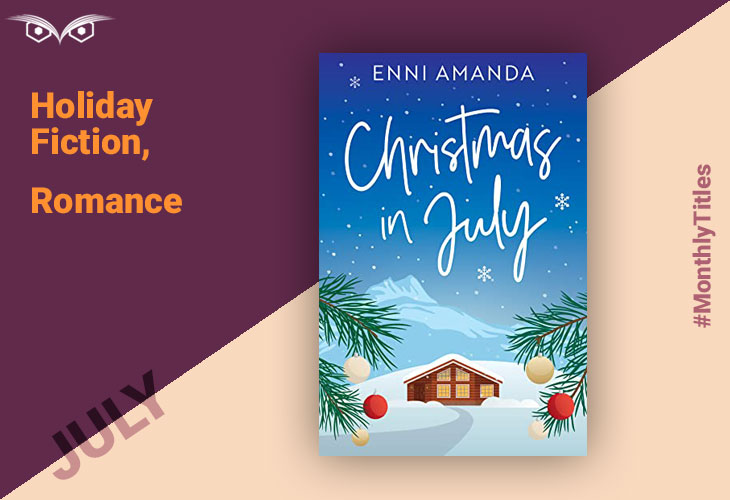 A short review for a short read. Christmas in July by Enni Amanda was my pick for July’s #MonthlyTitles book challenge. So let’s see, where do I start? I knew it, by picking a book that short, it might turn out to be either too bad or too good, short stories are so hard to write. Christmas in July was neither, it’s not long enough to be considered bad, but it’s not good either, it’s just average. I don’t like writing these kinds of reviews, but hey, a review can go both ways and the reason why they exist is to help other people form an expectation about a certain book. Whether or not these expectations are met later, after everyone’s read the book and has seen for themselves, is a different question. Everyone can express their honest opinion and say whether they liked or disliked the book (the important thing is to do it as kindly as possible.) That’s also the best thing about books, I think. Two people can get a different experience after reading the same book. That’s the beauty of it. Some people would like the book, some people would not. That doesn’t mean the book is good or bad. It’s both. It’s good for some and bad for others, that’s all.

Anyway, I should probably start talking about Christmas in July now. I certainly did not like it, it was not special or memorable for me and I don’t think I’d go back to it again. I do believe the author’s writing is good and it was ‘just this one story’ that wasn’t, so I’d love to read more of her books, but that’s the only positive thing I can say, I’m afraid. I just think that this story didn’t reveal the author’s full potential. And how could it, it was 73-pages long on my Kindle, so it barely had time to unravel. The story itself was too banal and predictable, and it wasn’t even that romantic as I thought it would be. If anything, I thought the whole situation in the beginning of the book was rather disturbing and kind of creepy, dangerous even? Right until the end I was still getting over the fact that Riley, the main character, didn’t mind spending days in a faraway cabin in New Zealand, in the middle of nowhere, with a raging snowstorm outside and a total stranger she had just met! Apart from bits and pieces of their professional backgrounds, we don’t get to know more about the characters and that was frustrating. How are we supposed to care about them if we don’t know them, as readers? I found the conversations forced and unrealistic, especially those with her colleagues in the end. I didn’t feel the Christmas spirit either, there was a little bit of Christmas food, a little bit of snow, but these two things alone don’t make the holiday. So overall, I didn’t feel the chemistry between Riley and Jonas, didn’t feel the romance, there was no Christmas spirit whatsoever, and these are all the things I was promised and was expecting from this book, so… Sadly, I wouldn’t recommend it for a cosy Christmas read… in July. Maybe reading it in December would help? I’ll leave you with the blurb, so that you can decide for yourself:

‘As Riley scores a job on a feature film, she’s eager to prove herself to Damian, the famous director she can’t stop thinking about. When they fly to Queenstown, New Zealand, to film on the snowy mountains in July, she’s ready for any discomfort. What she’s not ready for is a snowstorm that cuts her off from the rest of the crew or an unexpected visitor who seeks shelter in her cabin.

Any other girl would love to cozy up with Jonas, a gorgeous ski instructor carrying bags of party food. Not Riley. She’s desperate to get back to her job. The last thing she’s looking for is a protective Swedish guy telling her what she can and can’t do. But as things start to slip out of her control, Riley is forced to rethink her priorities.

This is a short, sweet romance read with a touch of danger and a dose of heat.’

I agree it was short, not sure about the rest. On to the next chapter of the #MonthlyTitles book challenge and the August read!