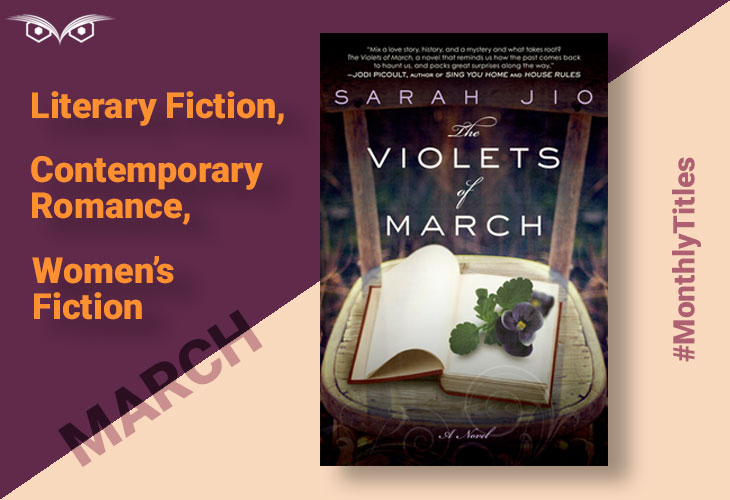 Sarah Jio’s writing captivated me from the beginning of the book and this was her first novel! It was so easy to get into the story and the more I read, the more I wanted to keep reading. But first things first, the blurb:

‘The island has a way of calling you home…

Ten years ago, Emily Watson was on top of the world: a best-selling novel, a husband plucked from the pages of a magazine, and a one-way ticket to happily ever after.

Now her perfect life has crumbled and Emily is left to pick up the pieces.

So when her great-Aunt Bee invites her to spend the month of March on her beloved Bainbridge Island, Emily accepts, longing to be healed by the sea. As she begins researching her next book, Emily discovers a red velvet diary, dated 1943, whose contents reveal a startling secret that could change her life forever…’

In The Violets of March, there was the story-inside-of-a-story plot technique again, used in so many books. There’s always the danger of that story being more captivating than the main one. I’m glad this was not the case here, as I was equally invested in both. You’ll have so many questions and you’ll want the answers straight away but you’ll have to wait until the end to learn how it all unravels. There comes a time in the book when the main character, Emily, can’t distinguish between what’s real and what’s in the book that she’s reading; she finds that reality intertwines too much with the fiction (or is it just a distant reality?) Neither can the reader say what’s what, as the two plots become too similar at a certain point but at the same time, it’s not the same story, something doesn’t add up.

I liked the fact that details were slowly revealed, giving us time to think about the whole picture and get to know the characters in the meantime. It’s a small set of characters: we have Emily Wilson, her best friend Annabelle, her beloved aunt Bee and her best friend Evelyn, Bee’s friendly and mysterious neighbour Henry. It wouldn’t be a romance novel if we didn’t have love interests: three mysterious boys who try to (re)conquer Emily’s heart: that’s Jack, someone she used to know in her childhood, Joel, her ex-husband, and Greg, her childhood sweetheart. On the other hand, we have the characters from the diary but don’t let me confuse you with more names. All of these are colourful enough to keep you entertained throughout the story. I don’t think they’re superficial or shallow as they may first seem, or as someone pointed out in a comment. There’s so much depth to their personalities than what they first appear to be. Their backgrounds definitely helped with that, as we got to know why they behave like that. They all have formed connections that endured the pass of time and that’s remarkable. Just keep reading.

The only thing I could point as a downside of the book is that I got the impression that Emily couldn’t make up her mind regarding the men in her (new) life. She wasn’t sure what she felt towards any of them and she could have explored her feelings on a deeper level more before making a decision. It felt a bit rushed and ungrounded. She ends one relationship very suddenly for no particular reason, and I wondered why. Then she jumps into another but later on goes back to the previous one(s)? I don’t know.

I loved the setting of the novel so much! Bainbridge Island is a very picturesque city and I almost imagined myself there, walking on the beach hand in hand with someone special. In the air, there’s this specific smell of the Puget Sound, you can almost sense the ‘seawater, ferry engine fumes, decaying clams, and fir trees’. I thoroughly enjoyed all the descriptions of the city, its houses, the beach, the people, the scenery… It was all described in such an evocative way.

Overall, it’s a very touching love story with lovely characters and a beautiful setting. It’s also about fate and missed chances, unspoken words and eternal love. Ultimately, it’s a story of forgiveness and hope, a nostalgia for a time you’ve never known. What more can you ask for from a book? It transports you to a place and it’s all you could ever wish for—an escape for a couple of days (that’s how long it would’ve taken me to finish it, if it wasn’t for the 46,829 other books I read simultaneously) to a small island where nobody knows you, so that you can think and be with your loved ones. Just be. Be present. That’s the message I got from the novel and I think it’s wonderful.

For me, it was the perfect in-between book. That means it’s a book I could quickly go through before and after diving into more serious/longer books on my TBR pile. It’s light and easy to read, an enjoyable distraction from reality. Isn’t this what we always want when snuggling with a book?