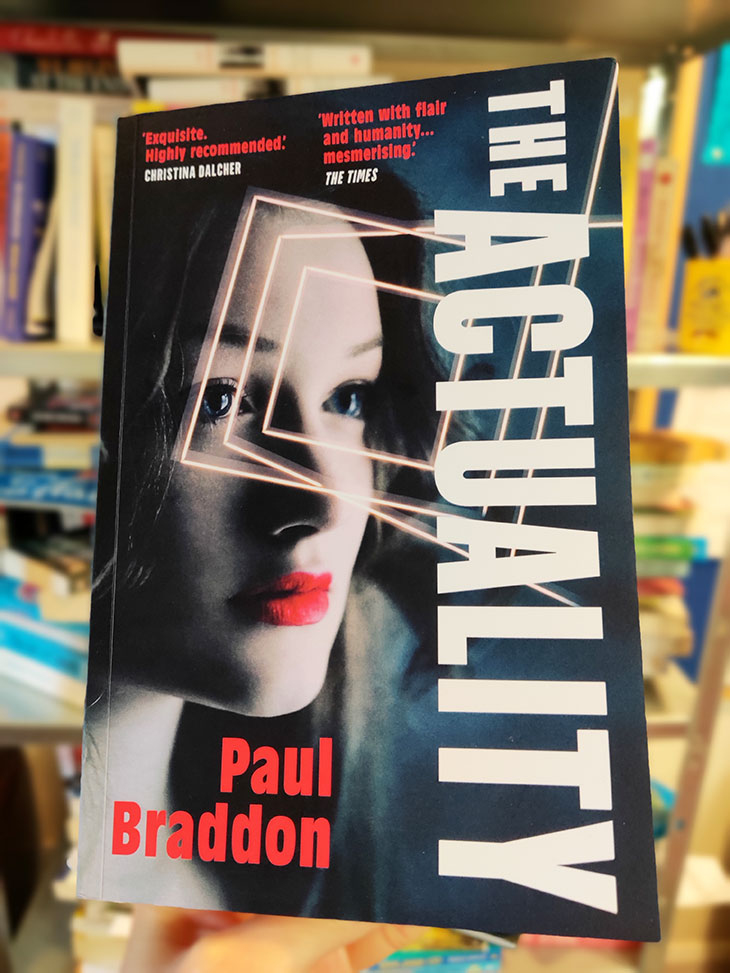 I was kindly gifted a copy of Paul Braddon’s The Actuality and I am participating in the Sandstone Press book tour to celebrate its paperback publication! I was afraid I wouldn’t be able to finish the book by the time I had to post my review. Little did I know that time would not be a problem at all, I read it in just a few days! The paperback was published yesterday, on the 20th January 2022, by Sandstone Press, and the hardback is now only £7.99 on their online shop!

Blurb from the back cover:

Evie is a near-perfect bioengineered human. In a broken-down future England where her kind has been outlawed, her ‘husband’ Matthew keeps her safe but hidden. When her existence is revealed, she must take her chances on the dark and hostile streets where more than one predator is on the hunt.

If I could read this book again just so that I could experience it all over again, I would. I was entirely immersed into the story, totally invested at all times and completely hypnotised by the characters, especially Evie. It is written in such a fluid and easily-readable way, you won’t notice the pages turning. I literally didn’t put it down, I was reading it before going to bed, after waking up, on the bus, on my lunch breaks, even while walking in the park! I recommended it to all my friends, as it has been a long time since I last read a book that captivating.

I expected it to be full of technical terms and complicated ideas to describe the technologically-advanced world, all the robots and newly-invented machinery. But Paul Braddon has used a very accessible language, he throws the occasional high-tech word in, but it is totally comprehensible. The events he describes are so imaginative that it is hard not to believe him. The dystopian images of a world in a little bit over a hundred years from now that he paints with his words are very plausible, so scarily inevitable, that it all feels real. It is as if it would actually happen in the not very distant future if we keep doing what we are doing to destroy our planet. Sci-fi and reality blend together perfectly, forming a brilliant exploration of the human mind, nature and morality.

One of the most important characteristics of the text is the exploration of the dangers of climate change, as it is indeed a very urgent topic. It is a theme that is always present in the book, Braddon always finds a way to remind us what humans did to the cities for them to become the desolate, dark and horrible places the characters live in. The descriptive part is not overwhelming, he provides us with just the right amount of details for us to picture the futuristic world of the book. I was really curious to learn even more about what happened to the Eiffel Towel, to Big Ben, and why people are rarely seen outside or what causes infertility, etc. At the end of the book the author takes it even further to explain more about the ideas behind his writing, where he got the inspiration from, what he had to consider, etc. It was amazing to have a glimpse behind the scenes and I definitely didn’t mind the extra couple of pages giving me more details on this strange but at the same time too familiar world.

I appreciate it when an author has strong world-building skills and this is so important for science fiction. Paul Braddon is a master in this regard! I almost felt as if I was living amongst the characters, experiencing everything at first hand. Although it is a very sad world that they are inhabiting—except for all the gardens, they seemed really beautiful—the vivid imagery of some of the places combines well with the darker parts of the book, depicting a destroyed, broken-down, post-apocalyptic England. Evie experiences all the bad things in the world for the first time, so does the reader, and during this journey we get to know her better. She is very well designed (as a character, and as an AI) and I really enjoyed her presence every step of the way. The fact that she had good and bad features—but, interestingly, making her neither good nor evil—that made her more human than she could imagine.

There is a part of the book, when she is captured by a psychopath called Timothy Maplin, that is super creepy and disturbing but essential and transformative in terms of character development. It is the moment in which Evie ‘grows up’ and realises she cannot count on anyone but herself. There is a perfect set of characters, not too many but, trust me, you won’t need more. Evie is the perfect main female character—she is strong, feminine, sympathetic and sharp-witted. She is more human than most of the humans in the book and her sensitivity is what makes her stand out. The rest of the characters are the perfect accompaniment in her journey, most of them made me smile and laugh from time to time, it was nice to have moments of joy and realise that the fate of humanity is not totally dark and grim.

I was pleasantly surprised all the way through the end and did not see the plot twist coming. It is a complicated plot, enough to keep you interested in how it unfolds until the end but also lets you follow the events easily and without too many distractions. My fear sometimes with good books is that their ending would ruin everything I have read and enjoyed so far and leave me with a bitter after-taste. This is not the case with The Actuality, as the ending was the culmination of a journey—for us as readers and for the characters. Fast paced and full of action, especially in the final chapters, it is a book that will keep you on the edge of your seat. Which reminds me to mention that the novel has been optioned for TV by BBC Studios and I can definitely see it turning into a successful TV adaptation as well.

It is ironic that the most distant thing from a human, an AI creation, turns out to be the most human of all the humans left in the world. Reading about Evie’s encounters with so many different people, not only her closest friends, ‘family’ or makers, but the people who try to capture her, made me think about all the human traits that separate us from other species, what makes us us. Are we really that different? Are we really better? I found a powerful message and meaning of this book, a philosophical exploration of what it means to be human. How far is humanity going to go in thinking they are capable of everything, before completely destroying the planet?

A little bit about the author:

Paul Braddon grew up in Surrey and lives in London with his wife Mary and son Thomas. He has a degree in English Literature and Language from Reading University. The Actuality is his debut novel.