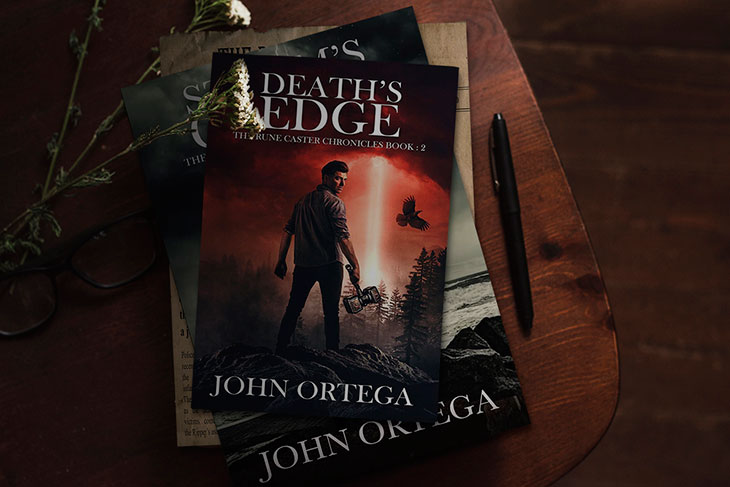 Thank you so much, SmashBear Publishing for kindly providing me with the eBook copy of Death’s Edge and for inviting me to be part of the book tour for this great read!

Wow, what a journey! This is an amazing book, it doesn’t let you relax until the last minute! There’s always something happening, there’s always action and battles and mystery. While writing my review, I really wanted to tell you everything about the plot, as it is so interesting! But I’ve kept it spoiler free, so that you enjoy it on your own! Also, it was the perfect book for the start of the spooky season! Read it and you’ll know why! 🎃

Let’s start from the beginning. Actually, if you really want to start from the beginning, I recommend that you read the first book of the Rune Caster Chronicles—Storm’s Child—first and then move on to Death’s Edge, which is its sequel. But even if you haven’t read the first one, you’re still in for a treat with the second book. You’ll still be able to get into the story and enjoy it, because even though everything is connected and includes the same characters from book one, the author has managed to keep the stories separated. I admit it, I haven’t read Storm’s Child yet, but it will definitely be my next read! I liked Death’s Edge so much that I am sure the first book of the series will be equally good.

John Ortega has done an incredible job at continuing the story of Nathan Mercer, an innkeeper, owner of the world’s only place for supernatural creatures, and his dealings with the fae, an ancient and powerful race that he would prefer to avoid. It’s urban fantasy at its best and John Ortega makes the transition from the human reality to the magical world so subtle and unnoticeable, it’s like that whole imaginary society actually existed. I loved the set of characters, I felt like they were all weirdos in their own kind of way. Silera, distant, cold and passionate at the same time, was one of my favourite heroines. Margie was another one, this sweet little girl melted my heart every time she was trying to act like an adult; and I loved her role in the final scenes as well! I enjoyed the fun conversations between Nat and Devon, they were messing with each other all the time and their witty and sarcastic remarks were a nice distraction from all the seriousness of the situations. Some of the scenes were truly gruesome and bloody, and others – so creepy, especially the ones at the Enchanted Forest theme park… 🎡

And the beasts! I have never encountered such amazing (and quite terrifying) creatures! The battle scenes were so many and very intense, I got why the book is called Death’s Edge… So all the quiet scenes in between came as a nice break from all the combats and were also used to delve into the characters’ pasts and the relationships between them. All this background information helped me to get to know them better. Another thing I quite liked were the Greek mythology references and Devon’s connection to the Greek gods. It was very interesting to read about that. The world building was very well done and I was so immersed in this fantastical world that John Ortega created that I really wanted to be friends with all the characters (well, maybe not with the evil ones.)

According to my rating system, Death’s Edge gets 5 out of 5 stars for being fast paced and fully-packed with a lot of action, great characters and deadly monsters. I am super excited for the next book in the series! 🤩

P.S. Keep your eyes peeled for my review of Storm’s Child! Coming soon!