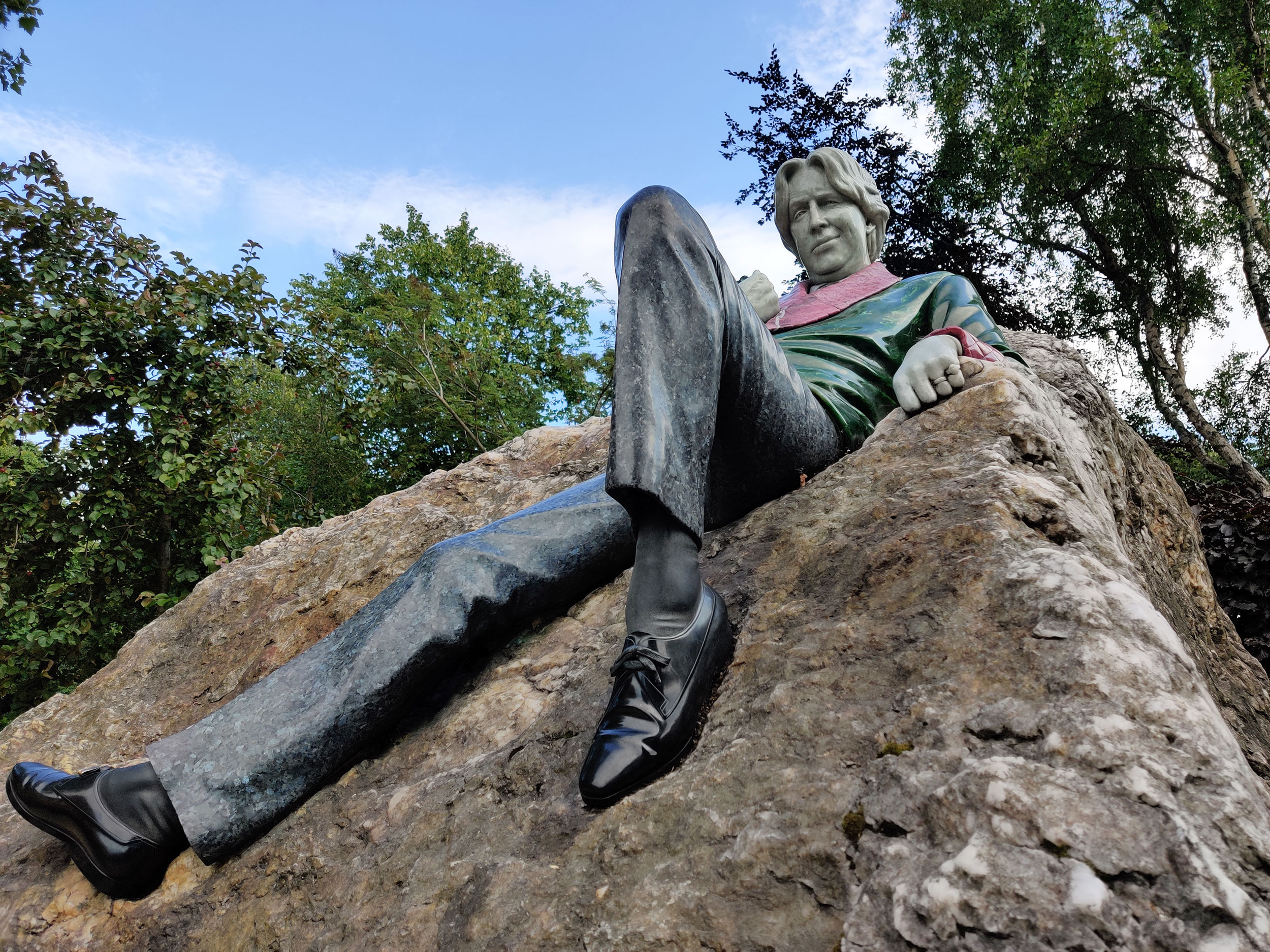 Trip to Dublin – Part I

This is the first post in the ‘Exploring’ category of my blog, so I am a bit nervous to share a new topic with you. But I’m glad I chose my trip to Dublin to be the first one – it was a dream! So welcoming and lively, I never thought I would enjoy my stay in a big city like this so much. For example, when I visited Paris it felt cold (quite literally, too) and grey and kind of pretentious. But Dublin was another thing, still busy and cosmopolitan but warm and friendly at the same time. I would love to visit it once more when we can travel without restrictions again! I am sure I’ve left so much more unexplored.

But let’s start with what I did explore. I went there in July 2019 (this feels too long ago 😲) and I was with my boyfriend, Vasko. Before going somewhere new, I always do my research and write down all the things I’d like to visit and also check all the promising places to eat. So I had an idea in my head of what to expect and our first impressions did not disappoint. We were surrounded by flowers everywhere we looked – on balconies, terraces, cafés, even the stores were beautifully decorated. I love all kinds of plants and greenery, so you can imagine my excitement every time we stumbled upon a building covered in flowers. They were on every corner! Not to mention the gorgeous gardens and parks around the city where you can wander for hours and enjoy the sun.

Our flight was an early one, so we arrived in the city centre in the morning and had time to explore a little bit. By noon we were starving and went to one of the places to eat from my list, Tang, offering Middle Eastern types of dishes. They serve breakfast, lunch and brunch and we got those massive wraps. They were so huge, mine even split in the middle. 😂 Even though my boyfriend got a spicy sauce in his by mistake, we both enjoyed them so much. The restaurant is quite small and with no inside sitting area, as far as I remember, but it looked quite popular among the locals, everyone was taking a moment to have a delicious meal for their lunch breaks. If you follow me on Instagram (@owl.bee.reading), I’ll tag all the places we visited, so that it’s easier for you to find them, in case you visit Dublin. Which, you should.

Then it was time to head off to our hotel which was a bit far from the centre but nothing too complicated to get to. We even walked there and it was a great opportunity to see what the city looked like. With no time to waste, we left our suitcases and went back to the more lively parts of Dublin, me – taking photos of each colourful door I laid my eyes upon, Vasko – making sure we didn’t get lost in the meantime. The weather was also very nice, as you can see from the sunny photos below, and I remember it was a very welcome change to the rainy and cold Edinburgh days (even in July I was still wearing jackets and cardigans in Edi.)

We reached the famous Temple Bar Pub in the heart of Dublin and I couldn’t stop taking photos of it and admiring the flowery façade. Located on one of the busiest and most touristy streets with the same name, it’s home to the largest whiskey collection in Ireland. The Temple Bar riverside area, spread over cobbled pedestrian lanes, is considered Dublin’s cultural quarter and the heart of the city centre’s nightlife, it’s very famous amongst tourists. The area also hosts a number of cultural and art institutions.

We decided to dedicate our first day in Dublin to getting to know the city centre and its surrounding areas, so that we can orientate ourselves better in the upcoming days. We headed towards Merrion Square, which is one of Dublin’s largest and grandest Georgian squares. On three sides are Georgian Houses and on the other – the garden of Leinster House (Ireland’s parliament building), and two museums (the National Museum of Ireland – Natural History and the National Gallery of Ireland.) Until about the 1950s, the houses in the square were largely residential but today most of them are predominantly used as office space. Many of the houses have plaques detailing the rich and famous who once lived in them, for example, Oscar Wilde himself, Daniel O’Connell and W. B. Yeats. The attractive central park features colourful flowers and shrub beds. It’s called Merrion Square Park and it’s a beautiful Georgian garden with Oscar Wilde’s memorial in it. He’s one of my favourite writers of all time, so I didn’t miss the opportunity for a photoshoot.

The monument consists of three sculptures and two stone pillars covered with quotes from Oscar Wilde’s writings and work. Its sculptor, Danny Osborne, says that he wanted to depict Oscar Wilde at the age of forty, when he was at the top of his career as a writer. Osborne considered it would be a good age to represent him, as several of his plays had been put on in various parts of the world and his first novel, The Picture of Dorian Gray, had just been published. The two expressions on Oscar’s face, one more sombre and sad, the other happy and positive, are connected to the comedy/tragedy masks from the ancient Greek theatre. Wilde is considered to be a master of paradoxes and the statue honours this duality of his nature in several ways. You can spot three rings on the statue’s fingers – Oscar’s wedding ring and two Egyptian scarab rings on both his little fingers. Asked about them, he would say that the left one represents the good luck and the right one is for the bad luck, you can’t have good luck without bad luck, joy without sorrow. To get away from the formality, Osborne chose to depict the writer in a relaxed but provocative pose. It’s a way of projecting Wilde’s dandyism and the fact that he was quite a controversial and flamboyant character, which is also why Osborne chose colourful stones to make the statue. Oscar is dressed in his famous smoking jacket, carved in solid jade – a stone often associated with immortality. This is actually the largest jade carving outside of Asia and one of the biggest in the world. All carved in semi precious stones, the life-sized statue sits on top of a huge 35 ton quartz boulder from Wicklow Mountains. Osborne had to travel to different parts of the world to source all the materials needed to make it. To reflect Oscar’s love for all things Greek, the two other sculptures are both made in bronze and have a green patina, something very typical for Greek sculptures. On one side there is the torso of a young Dionysus, God of youth, wine and theatre, all of great interest to Wilde. On the other side sits his wife, Constance, who was six months pregnant at that time. All this information I gathered after listening to an interview with the sculptor himself and I’ll link the original article here.

Another reason for Dublin to leave such a great impression on me, is the fact that it is a very literary place. There are so many writers who are celebrated throughout the city by statues built to honour them, perfectly preserved buildings that they used to once inhabit, museums, plaques, benches, bridges… The cherry on top is without a doubt the Trinity College Library located in Trinity College Dublin. But I’ll get to it in Part II.

With all those literary references, I was in heaven. I must have looked like an overly-enthusiastic kid at a fair, eating ice cream and tons of cotton candy – I was constantly in awe. Exhausted from all the travelling, walking around, gasping and eating delicious food, we went back to our hotel, after buying some veggies and cooking ourselves a simple but delicious meal at the hotel.

And that’s a wrap for Day one, see you on Day two!

In case you need me… #owlbeeexploring!