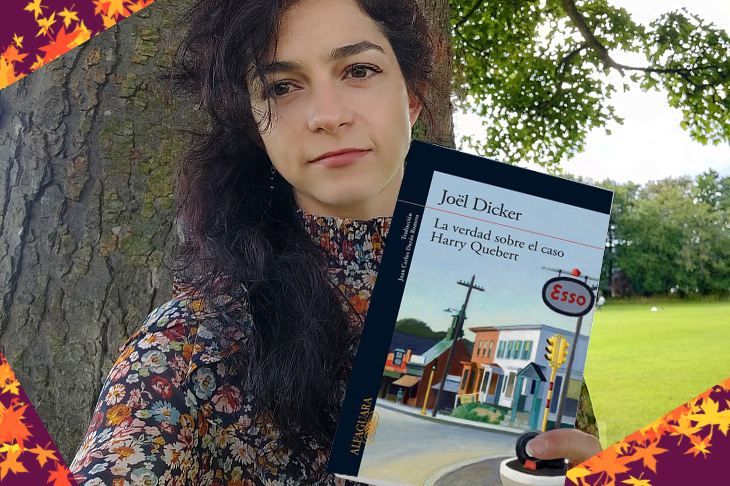 The Truth About the Harry Quebert Affair: book review

I read this book a few years ago when I was still living in Spain and read it in Spanish, hence the Spanish cover of the paperback. I wrote my review back then but I wanted to extend it a little bit before publishing it here, only to find out that I don’t remember some of the details (or the important parts, like the ending, for that matter) in the book! Note to self: write the review right after finishing a book.

Here is how Goodreads summarises the plot:

‘August 30, 1975: the day fifteen-year-old Nola Kellergan is glimpsed fleeing through the woods, never to be heard from again; the day Somerset, New Hampshire, lost its innocence.

Thirty-three years later, Marcus Goldman, a successful young novelist, visits Somerset to see his mentor, Harry Quebert, one of the country’s most respected writers, and to find a cure for his writer’s block as his publisher’s deadline looms. But Marcus’s plans are violently upended when Harry is suddenly and sensationally implicated in the cold-case murder of Nola Kellergan – with whom, he admits, he had an affair.

As the national media convicts Harry, Marcus launches his own investigation, following a trail of clues through his mentor’s books, the backwoods and isolated beaches of New Hampshire, and the hidden history of Somerset’s citizens and the man they hold most dear. To save Harry, his own writing career, and eventually even himself, Marcus must answer three questions, all of which are mysteriously connected: Who killed Nola Kellergan? What happened one misty morning in Somerset in the summer of 1975? And how do you write a book to save someone’s life?’

I found The Truth About the Harry Quebert Affair very slow and rather boring at times, at least in the middle. The beginning was okay, it was intriguing, I thought the idea was good but as soon as Marcus Goldman started investigating and revealing facts about the past, that’s when it started to get a bit boring and repetitive. All the characters share their memories and points of view about the events that happened 30 years ago in Aurora. If I had started reading this book 150 pages before it ended, I would still have got the whole point, as until then it’s basically the same stuff repeated by each character. It´s around this point of the book when the story started to get interesting and things were getting revealed, although it all seemed a bit rushed. I liked the way the plot thickened and how everything was interconnected, and I even found out some things I didn´t expect. So, if you’re looking for a crime story with many plot twists, this is the book for you!

The story would also remind you of Lolita, as it has all the forbidden love references, it is about that kind of love that makes all the sacrifices worthy. If you also want to have an insight into the inner life of a writer, with all their struggles, inspirations and their dreams vs the reality, you will find all of this in this book. It will for sure keep you at the edge of your seat, as it is full of mysteries and new suspects, new things to consider in the process of discovering the truth. And the truth has been well hidden for 33 years, until this moment.

Even though the main problem of the book is that there are many unnecessary pages and there’s no point in being such a long read, at the end I think it’s a good one, if you are patient enough to wait until the very end to find out who-did-what. I also struggled to really connect with the characters on a deeper level, I found them lacking depth and the dialogues a bit juvenile. I loved sergeant Gahalowood’s character, though! His conversations with Goldman were the best and definitely made the whole read a tiny bit lighter and definitely more fun. Overall, it’s an enjoyable and easy-to-read book but I wouldn’t say it stuck with me for long after finishing it (that’s why I couldn’t remember many details!)

On to my next read and I’ll see you next week!