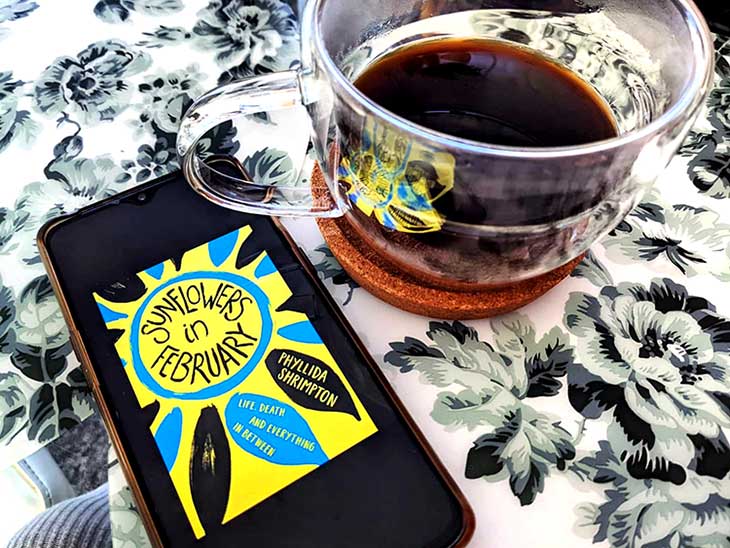 I always say that each book is different for everyone, every reader experiences it in a unique way. However, with Sunflowers in February I couldn’t help but think, what would somebody not like about this book? I even took my curiosity further by going and reading some of the reviews online. To my surprise, there were people who didn’t like the book and ultimately that’s completely fine. But I just couldn’t help but disagree with some of the negative reviews out there (or, let’s face it, with anything less than five out of five stars for this book).

I’ll quickly share the summary of the plot and then I’ll move on to explaining what I disagree with and why.

‘Lily wakes up one crisp Sunday morning on the side of the road. She has no idea how she got there. It is all very peaceful. And very beautiful. It is only when the police car, and then the ambulance, arrive and she sees her own body that she realises that she is in fact… dead. But what is she supposed to do now? Lily has no option but to follow her body and she sees her family – her parents and her twin brother – start falling apart. And then her twin brother Ben gives her a once in a deathtime opportunity – to use his own body for a while. But will Lily give Ben his body back? She is beginning to have a rather good time…’

Many people pointed out how selfish and egoistic the main character, Lily, is. She literally uses her brother’s body just so that she can live a little bit longer, stay with her family and enjoy the things she used to take for granted. Well, it is understandable, isn’t it? She dies at the age of 15 before even being able to fully understand life’s possibilities in front of her, before even realising what life could offer. She had dreams, she had friends and family, she had a life. She stays in a limbo right after the car accident and although she witnesses her family and friends’ immediate struggles to cope with her death, she is incapable of doing anything to get their attention or to let them know she hasn’t left. No one can hear, see or feel her and the loneliness and fear she experiences are devastating. Therefore it seems very logical to me that she would cling to every little hope there is to bring her life back. Lily desperately holds on to the opportunity that Ben offers to her – to borrow his body for a little while. The scary part comes when neither of them knows how long this ‘a little while’ would last, as Lily starts to enjoy herself and finds it hard to let go. It is heartrending to read about her hopelessness, about her life not yet lived and her broken family. Although the book is definitely written in a humorous style and there’s a lot of self-irony, funny scenes and comical situations, something would happen unexpectedly that would almost grab you by the throat and make it hard for you to swallow. Next thing you know, tears are running down your cheeks.

Fear, I decide, is a feeling that stops you doing something that might be fun. I have no time for fear.

The other thing that some people didn’t like was that the writing was somewhat childish and this made Lily seem immature. I think this only indicates that the author has done her job. I mean, that’s the point – she has to sound childish, she’s only 15! She had yet to learn how to be an adult and tried to get a taste of it by being ‘a big girl’. The truth is that she is still a little girl that only wants to spend time with her parents and friends, who needs her stuff and her pyjamas and stuffed animals. A girl who needs to know that she is loved and not alone, someone to tell her that it’s going to be okay.

This book broke my heart multiple times only to put the pieces back together in the end. The devastating bits of the book were definitely those describing Lily’s parents’ emotions and the different ways they try to deal with their grief. Reading through those parts with a tight throat was cheerfully distracted by Lily doing something ‘very Lilyish’, as she calls it, as she is trying her best to ‘act like a boy’. I often found myself crying and laughing at the same time, especially towards the end and that doesn’t happen often when you read something. Not to mention, a book hasn’t managed to make me cry in a long time. It is understandable, as it is a hard topic to write about, but it was so heartbreaking to imagine what might really be happening inside the character’s heads, inside mourners’ minds. It was painful to read about all those feelings of indescribable loss put into words that were hard to swallow.

The writing and the pace of the book are really good and it is an easy-to-follow read. There is only one plot hole in my opinion and I didn’t quite understand the point of it. It’s about Fred, the Auto Repair Centre mechanic whom we meet twice in the book. He doesn’t intervene in any kind of way and doesn’t bring anything to the plot, except for being suspicious about something that the reader already knows, so I didn’t really get what was the purpose of his character. Other than that, the rest of the characters are skillfully built, especially all the teenagers that the story is revolving around, which could be tricky. It all felt very real – the raw emotions they felt, the words they said (or didn’t say), the things they did. The identity of the driver who did the hit and run adds to the mystery and the anticipation of how the story will unfold. There were some eerie moments as well, for some reason I found some of the experiences Lily had spine-chilling.

Sunflowers in February is а truly beautiful story that focuses mainly on life and death but the themes of gender, bullying and drugs are also present, although not referred to in much depth. It makes you think about what you have, makes you ask yourself whether you appreciate it enough and makes you wonder, is there really something else, something more beyond what we can comprehend? The ending couldn’t be more fitting, it makes the story complete and Lily finally gets her closure.

I recommend the book to people who would like to read something emotional and funny, beautiful and devastating at the same time. A raw insight into what it means to live and to love, to lose and to get a second chance, to mourn and to heal.