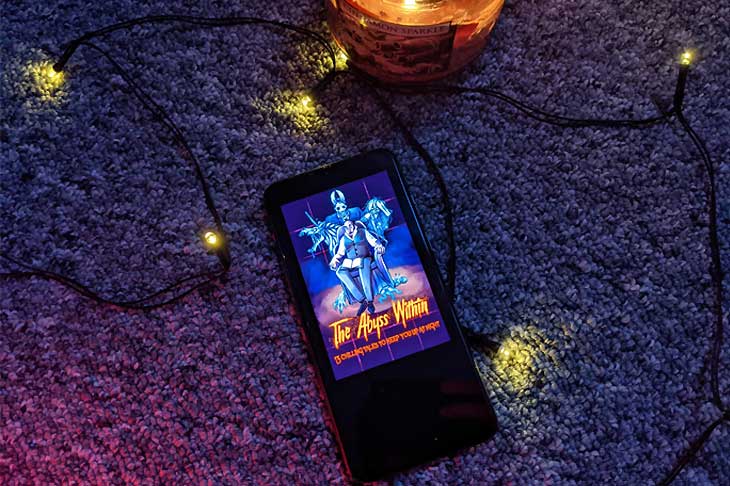 The Abyss Within – A SmashBear Anthology: book review

I am so happy that my blog is the first stop of the book tour for The Abyss Within, an amazing anthology of horrifying tales published by SmashBear Publishing. They specialise in urban fantasy, fantasy, and paranormal romance.

This is one of the best horror anthologies that I have read! It consists of 13 tales from 12 different authors (Tabitha Potts joins with two short stories). All the stories were terrific (literally!) which is basically what you want from this genre. Some of them were longer, some were much shorter but that did not make them any less scary. By no means.

I sometimes prefer reading short stories instead of novels for a number of reasons – you can read them very quickly, you don’t have to go through the whole lot of pages to get to the essence and you have a lot more varied stuff to read presented to you in a concise way. Don’t get me wrong, I love reading novels and I do read more of them compared to the short story collections but sometimes I’m in the mood for something short and sweet.

Some of those stories were so horrifying, I could feel the hair on the back of my neck stand up, so this collection was anything but sweet. For me this is a sure sign that it’s doing its job. I really liked and appreciated the ‘Content Warnings’ page at the end of the book because some people might find some of the topics triggering negative emotions for them. It also helped me to mentally prepare for what was coming next but I still wasn’t ready for it and I didn’t see it coming for the most part of the book.

But let’s start from the beginning, shall we? I’ll comment on some of my favourite tales without giving away too much of the content and then I’ll talk about the collection as a whole.

‘Vermin’ by Kerri Spellar marks a strong beginning for The Abyss Within. I liked the fact that this was the opening story, it sets the mood very nicely, making it clear for the reader from the very beginning – this is going to be a chilling experience, read on at your own risk! I was immediately immersed in the story which was about Karen, who lives in a small home and has to travel to the neighbouring village every day to work. This one time after a nightshift she’s driving home at midnight and sees something on one side of the road greeting her in the darkness, while she desperately hopes it was just a trick of her imagination but unfortunately… It was not. It was a man wearing a dead-animal skin on his face as a mask! In the middle of the night! I won’t go into any further details, you’ll have to read it for yourself and get spooked on your own. There was a nice set of characters who were believable and the setting was in the spirit of the events – dark and unnerving. The author managed to slowly build the tension which made the story so creepy. The whole time I had that feeling that something was going to happen but the fact that I didn’t know when and what exactly kept me on the edge of my seat the whole time. Scary stuff, really scary.

‘Stone Hollow’ by Jerrod S. Smelker: I love Halloween, I love mysterious towns with so many secrets that even the locals start to forget them and are acting weird about things. You should definitely abide by the rules when moving to a new town and especially after so many warnings from the locals. Jeff Connor learned that the hard way after moving from Oregon to Stone Hollow, a quiet subdivision on the outskirts of town. I liked the unknown threat, the sense of upcoming dread and the creepiness of the old lady standing in her front window with candles lit behind her… Spooky!

The other one that I liked is from J. T. Lozano and it’s called ‘Come Play With Me’. It’s about a couple that goes on a vacation and the girl, Lindsey, is very keen on trying this scuba diving thing but her partner, Danny, is not so sure anymore after having a dream that something bad was going to happen (or maybe it was a vision?). Guess what, something did happen and it involves a little girl, giggling. Now with this one I felt as if I were watching the pilot episode of a mini series – the perfect scenario of a ghost story to base a TV series on. Well-written and fast-paced, it was a very nice addition to the anthology. I wished there were a longer version of that one, I’d totally read it.

Jacek Wilkos has written ‘The Door Viewer’ and I didn’t know until now that such a short story can be so spine-chilling! Literally! Now every time I glance at the peephole of my door I think of it.

‘Voodoo Doll’ by Lisa Shea. This one I quite liked mainly because of the characters but also the story itself. The title gives away a lot of what it is about but there’s an unusual twist which I did not expect. Also, building believable characters in short stories is something difficult to achieve, but I think the author did a great job at making the reader hate Bethany, the protagonist. As an author you’d want your characters to evoke some kind of emotion from the readers, even if it’s resentment towards them. It means that it’s a well-designed character. There are two main reasons why the reader would feel indifferent towards the protagonists (they just don’t care what is going to happen to them in the end): it’s either because they weren’t developed well enough or just because the character is a bad person. Thankfully, in ‘Voodoo Doll’ it was the latter and I really enjoyed it.

There are so many synonyms for the word ‘scary’ in the English language but still each one of them adds a slightly different undertone to the actual meaning of it. After finishing the book, I had all these words swirling in my head and was amazed at how every story was able to evoke a different meaning of the term ‘scary’. If I should use one synonym to describe the feeling that took hold of me after reading each tale, I’d say that ‘Vermin’ was creepy, ‘Baba Nooa’ was hideous, ‘Stone Hollow’ was spooky, ‘The Mask’ – evil, ‘Dark Times’ – nightmarish, ‘Come Play With Me’ – eerie, ‘Crow Girl’ – macabre, ‘The Door Viewer’ – chilling, ‘Voodoo Doll’ – cruel, ‘Masquerade’ – traumatic, ‘Tea For Two’ – hellish, ‘The Munchies’ – freaky, ‘When The Dead Walk’ – horrendous.

I believe that all these words put together will give you an idea of what reading the anthology felt like.

One thing most of the stories have in common is the fact that they were pretty graphic – a lot of blood was used and actions such as biting, chewing, bleeding, tearing apart as ways to strike terror into the reader. While I normally don’t get (easily) scared of watching or reading stuff like that, some stories really did change that for me. Still, I liked the fact that not many of them were about cannibalism or people-being-eaten-by-monsters kind of stuff. This is just too cinematic for me. I liked the presence of the psychological element (that’s one of the reasons why I like reading good horror tales) – I was able to ‘sense’ the danger and imagine all the horrors without the author telling me that. And there’s also no need for blood and massacres in every piece of writing in order to make it terrifying. The psychological factor is super important for me, so that a story could really frighten me, and I was very pleasantly surprised to find out that almost all of the tales on the list checked that box (as much as the word ‘pleasantly’ can relate to a horror anthology).

Another thing that was very well executed in the selection of the stories is that they were all very straight-to-the-point and easy to follow. Something that I find very challenging for this type of writing is that sometimes the length restrictions result in a poorly structured story. It is one of the hardest genres to write because the author doesn’t have the time and space and the number of pages to make it work for you, to build the tension. That is why the wording is very important and it all works very well here, I was immediately drawn into the stories and felt as if I had been reading them for longer. They were well-written and fast-paced and reading through the scenes felt like watching a film. I love that for a book and it’s a great strategy for writing a short story – a lot is going on in a short amount of time (and pages).

Overall, it’s a 5 out of 5 stars read and I recommend it to horror-loving folks, who would appreciate a great collection of spooky short stories not only on Halloween but on any day (or night) of the year!

This is a charity anthology in support of Women’s Aid and the publisher will donate all profits to Women’s Aid.

Thank you so much SmashBear Publishing for kindly providing me with the eBook copy of The Abyss Within and for letting me be part of the book tour for this great anthology!